If there’s one place in India that showcases Indian-ness in all its glory, it has to be Rajasthan! The land was targeted by all invading forces as an alluring catch and several wars have been fought on its soil to save the culture and history of the place from being razed to the ground. So, while the rest of the nation displays its many Mughal and colonial structures, Rajasthan sends the traveler into a stupor with the grandeur of its Indian craftsmanship. In this guide, we’ll tell you how to spend your best time on a 4-Day Udaipur Itinerary that will enchant you with its beauty.

While travelers planning to traverse the entire state at one go stay in Udaipur for 1 or 2 days only, the mindful wanderer looking for an eclectic taste of the city’s varied landscape will find places and activities aplenty to spend a comfortable 4 days in the city. Reaching the city should not be disconcerting at all. Udaipur has a domestic airport that is connected to all the metro cities and even some of the Tier-2 cities. Trains are also available to Udaipur City station from all over India and buses ply to and from all the major cities in Rajasthan.

The best time to go on an Udaipur trip is October-March when the weather is relatively pleasant. Amongst the many marvels of the state, Udaipur has garnered the reputation of being one of the most frequently toured cities in Rajasthan for its amalgamation of natural scenic beauty with grand palatial architecture. While the days are comfortably warm and sunny, nights are cool and windy, and can go down to 8-9 degree Celsius in January. So, here’s a 4-day Udaipur itinerary for a relaxed yet fulfilling journey in one of India’s oldest and most beautiful cities.

Once you’ve arrived and checked in to your hotel, freshen up and start your Udaipur trip at Lake Pichola. Udaipur has earned the epithet ‘City Of Lakes’ because of the several lakes sprawling in and around the city, of which Lake Pichola is perhaps the most picturesque. It is a man-made freshwater lake which was built in the year 1362 to meet the drinking and irrigation needs of the residents.

Start your sight-seeing with the City Palace Udaipur, the seat of power of the Mewar Dynasty after Maharana Udai Singh moved his residence from Chittorgarh. The City Palace is a huge complex and will take you at least 1-2 hours to visit each of its many monuments. Made of marble and granite in a style fusing Rajasthani, Chinese, Mughal and European traditions, this palace complex is a textbook in itself on the rich history of the city and state of Rajasthan.

Inside the Palace Complex, the following structures are a must visit –

City Palace Museum which houses various artillery and artefacts used by the royal members of the Sisodia Clan, including the famed warrior Maharana Pratap. It also displays several portraits by Raja Ravi Verma, one of India’s most revered painters.

Rajya Angan or Royal Courtyard, Krishna Vilas, Badi Mahal, Mor Chowk, Sheesh Mehal, Zenana Mahal are other parts of the complex that act as a lens to the daily lives of the royals.

Fateh Prakash Palace and Shiv Niwas, also within the palace complex, have been converted into heritage hotels and provide astounding views of the lake. The Fateh Prakash Palace also houses the world’s largest private collection of crystals in The Crystal Gallery and an entry fee of Rs. 700 is charged for visitors who have not put up at the hotel. You can also visit the Jagdish temple right outside the palace complex.

The Jag Mandir Palace (or Lake Garden Palace) is built on an island in the centre of Lake Pichola and you need to take a boat to reach it. Gul Mahal, Bada Pathharon Ka Mahal and Darikhana are some its main attractions.

The Monsoon Palace (Sajjangarh Palace) on a hilltop can be your next destination. As the name suggests, this was the monsoon retreat for the royals since the Aravalli Hills on which it is situated would provide beautiful views of the clouds and the palaces and lakes below.

Before you end the day, visit the Shri Manshapurna Karni Mata Temple located on the Machla Magra Hills, near the Doodh Talai Lake. You can take a ropeway car from the lakeside or walk up to the temple. Watch the sun set on the Pichola Lake, either cruising on a boat or sitting by the lakeside. The memory of this sight- the brilliant-orange hued rippling waters of the lake- will stay with you long after you have left the city.

You can spend your evening strolling through the many markets of the city, famous among which are the Hathi Pol Bazar and Bada Bazar.

Begin your second day of the Udaipur trip with a unique experience by visiting the vintage car museum in the city. Your tour today will be focused on the second most popular of the lakes surrounding the city- the Fateh Sagar Lake. This lake was built in the 17th century to the north of Lake Pichola.

You can sit by the lake or enjoy in one of the many eateries lining this site. There are 3 islands on the lake and you should definitely visit these, specially the Nehru Park and the Udaipur Solar Observatory.

Close by are the Moti Magri hill with a memorial of Maharana Pratap on its summit and the Neemach Mata Mandir. Also visit the Chetak Smarak nearby which is the final resting place of the eponymous horse of Maharana Pratap.

The Saheliyon ki Bari or “Garden of Maidens” is less than a kilometer away. Post lunch, you can travel to Nathdwara which is an hour’s drive from Udaipur. Located on the banks of the Banas river, this town is popular among Hindu devotees for its temple of Srinathji, an infant incarnation of Lord Krishna.

Come back to the city and spend the evening at one of the restaurants overlooking the Aravalli Range for a traditional Rajasthani thali.

Kumbhalgarh is a renowned town of Rajasthan, about 86 kilometres away from Udaipur. A 2-and-a-half hour drive in a cab is your best bet for reaching this town. Constructed by Rana Kumbha of the Mewar Dynasty, this hill fortress is one of the grandest in Rajasthan’s list of World Heritage Sites.

The Zanana and Mardana Mahal inside are particularly to watch out for. The complex also houses the Neelkanth Mahadev Temple dedicated to Lord Shiva.

The fort is encircled by a dense green tract, the Kumbhalgarh Wildlife Sanctuary, and you can take a safari here to spot the wolves, leopards, sloth bears, nilgais and various other fauna hidden amidst the foliage.

After coming back to Udaipur late in the afternoon, you can sit by the Ambrai Ghat and watch the sun go down in its clear blue waters. End your day with a cultural show at Bagore ki Haveli.

On the last day of your Udaipur trip, visit the Dhebar (or Jaisamand Lake), the second largest artificial lake of India. The lake is encompassed by the Jaisamand Wildlife Sanctuary lined with teak trees.

The marble dam on the lake is 300 metres long and holds the Hawa Mahal Palace, the seat of the Mewars during winter.

If you want some more peek into the history of the Rajasthani people, visit the Bharatiya Lok Kala Kendra before ending your trip at Shilpgram. Shilp Gram which opens at 11 a.m. is a 70-acre land showcasing the best of Rajasthani art and folk tradition; this is the place where you should end your trip to carry home with you a bagful of memories connecting you to your ancestral roots before hitting your regular digitized worlds again. 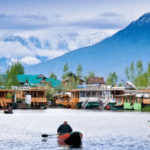 What to Do During an Indian Tour

Fun Things to Do in Thekkady with...

Khajuraho Temple – All you need to...

A Visit to the Seaside temples of...