Home Adventure Bhangarh Fort, Visit to the most haunted place in Asia!
AdventureRajasthan

Bhangarh Fort, Visit to the most haunted place in Asia!

When it comes to ghost stories, Bhangarh fort can be a perfect backdrop. The gigantic mountains behind the Bhangarh fort provides an incredible resemblance to a ghost house!

During my recent visit to Jaipur, my curiosity made me visit Bhangarh fort as it was at a distance of only 83 KMs.

There are a couple of stories associated with Bhangarh fort. Some say that princess Ratnavati accidentally killed a magician, named Singhia, who was madly in love with her. Before dying, Singhia cursed the whole place. This lead to a war and all the residents of Bhangarh were killed including princess Ratnavati of Bhangarh and her soul still wanders.

Another story enveloping Bhangarh Fort is about Guru Balunath. He was a religious and revered figure in India and lived in isolation. When the fort was being built, there was a possibility that the fort’s shadow might cover Guru Balunath’s abode. Guru Balunath warned king of Bhangarh that the fort shadows should not touch his area. But, the king ignored his warning and built the fort according to the plan. But, as soon as the shadows touched his spot, he cursed the village and the Bhangarh fort was never built.. The royal family gradually perished due to his curse.

Well, these are stories about Bhangarh Fort can be told to scare people off or to make Bhangarh fort a famous tourist attraction. But, personally, I do not believe in any of these bizarre & seemingly stupid stories. We visited Bhangarh fort only to check out how spooky this place can get. We were not disappointed because the fort is actually very spooky! 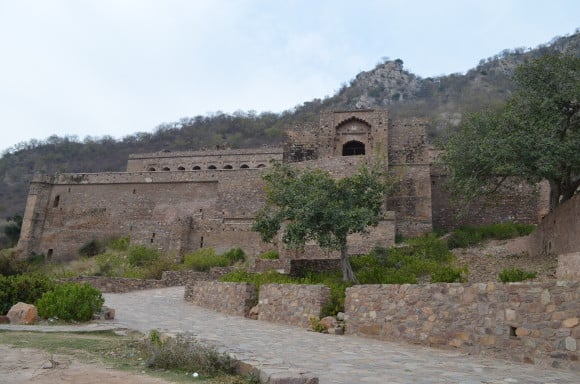 The palace in Bhangarh Fort. Spooky, isn’t it?

When we reached Bhangarh fort, we saw a line of cars parked outside. It was just like another tourist spot. As we entered, we met the watchman. Out of curiosity, we asked him about ghost stories. He started laughing and denied knowledge of any paranormal activity.

As we explored the ruins of Bhangarh Fort, we talked to some other locals, seeking ghost stories. But, we were disappointed to know that no such incidents have occurred, ever! Staying back here after 5:30 pm is strictly prohibited here because wild animals wander in the ruins of Bhangarh fort, searching for food after sunset. Also, Bhangarh Fort is a preserved archaeological site. Imagine any archaeological structure in India. Will any of them allow visitors after evening? No! Same applies to Bhangarh Fort as well!

When we entered the gate, we saw just a long stretch of ruins of Bhangarh Fort. This stretch lead us to a huge tree which had the widest trunk ever! The tree spread its branches in a magnificent fashion. If you have a weak heart, you will not be able to stand near this tree after sunset. 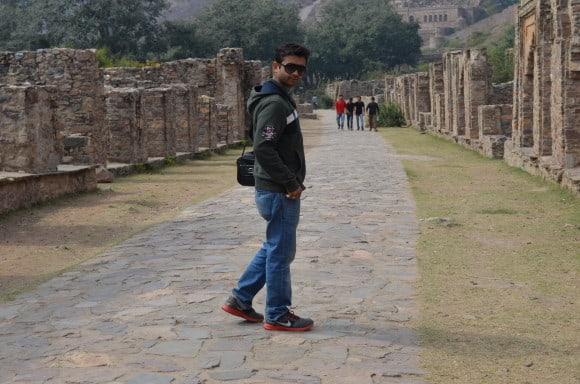 Checking out the ruins of Bhangarh Fort 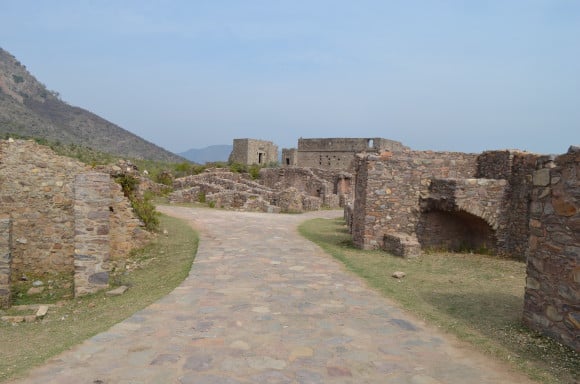 Once we crossed the tree, we saw a magnificent view! The Bhangarh fort palace was standing tall in front of us in its complete elegance! There was a temple outside the palace. But, surprisingly, there was no idol inside. This raised our brows and it surely made us think the reason. 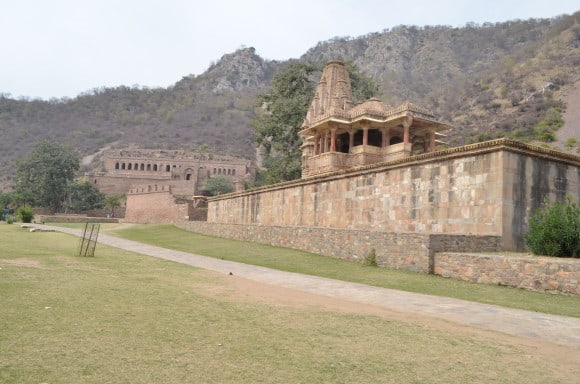 The temple in Fort premises 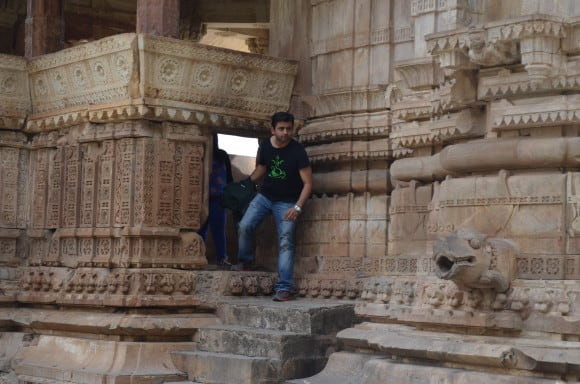 Exploring the ruins of the temple

We entered the palace and climbed up the stairs. We reached the top of Bhangarh palace to discover a spectacular view of the nearby village. Behind us were 3 giant mountains. The backdrop of mountains gave a unique aura to the whole place. Moreover, the clouds formed made the atmosphere dull & gloomy, adding to the spookiness of Bhangarh Fort. The mountains and clouds made the fort look very spooky. 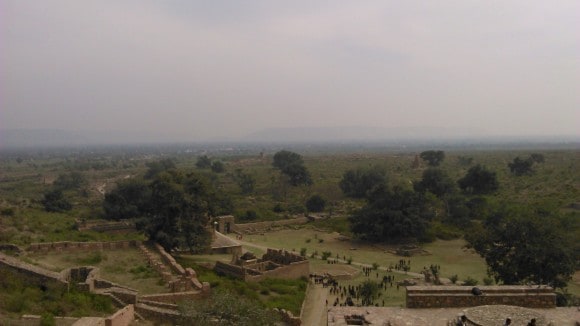 View from the top of the Bhangarh palace.

If you browse on the internet, many claim that there are ghosts here. But, the locals deny this. The fort might be spooky, but it definitely not an abode for spirits. There have been many adventurers who have spent a night here. But, they returned back without a scratch on their body. Yes, the place is not safe at night because of wild animals in vicinity. As far as ghosts are concerned, there is none.

However, I would surely recommend a visit to Bhangarh fort. The architecture of the fort is spectacular & the story fascinating. You can stand between the ruins and try to imagine how must the story have unfolded!

Also Read: Things to do in Jaipur | 21 Recommendations

2) You will need one hour to explore the whole fort

3) Talk to the locals; shepherds, watchmen etc. Try and find out if they have any stories to share

5) You can drive the car right up-to the fort. There is no trek involved. 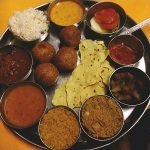 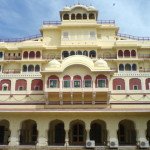 Get to know the wonderful Dudhsagar waterfall...

Deoriatal Chandrashila Peak Trek – How to...

Travel Tips for a Road Trip

Here’s what to expect from Avalabetta –...

7 offbeat destinations to consider for your...

It surely is!! Has a unique experience 🙂

[…] been a place of mystic beauty and mysterious places. One of the most haunted places of India is Bhangarh Fort, located at 83 kilometers away from the city of Jaipur. Besides its mysterious history it is a […]