There’s nothing like waking up to the calling of birds. At least for a bird lover like me. Too bad, the cities don’t give us the opportunity to experience these beautiful creatures, except for in zoos or at the most in cages, tucked in apartment balconies. I dislike the first and absolutely detest the second. Hence, for someone like me, a bird-watching trip makes the most sense, if I have to see birds in their best forms. So last December, I woke up my wife and kids on a foggy Saturday morning with the incentive of taking them out on a day trip. Despite their initial resentment of waking up at 6 am on a holiday, they ended up with much enthusiasm and excitement, by the time we left. Until the cab came and we left, I had not revealed that we were headed to the Thol Lake Bird Sanctuary, right outside the city.

We booked an Ahmedabad taxi with an excellent driver who was a local and knew his way around the Thol Lake, as well as the road that led to it.

The Thol Lake sits in the Mehsana district of Gujarat, about 20 Km from Ahmedabad. On a good day, it doesn’t take more than an hour to reach. But being a weekend, we encountered holiday traffic near major junctions.

The bird sanctuary fringes the Thol Lake and houses more than 100 species of birds, including some really exotic migratory birds. But this is all theory and output of online research, which I wouldn’t believe until I see something with my own eyes.

As we neared the lake area, the evergreen vegetation and the water body made the fog appear thicker. But the sky was opening up slowly to reveal shades of orange and yellow.

We left the car outside and walked along the nature trails with a few weekend tourists like us in tow.

The lake and its sanctuary

The 7 square kilometers of the freshwater lake was quite shallow with marshy banks. The vegetation in this part of the state is quite scrubby and stunted, which does not allow the forests to appear thick. We did not find much of wildlife among these forests. The reservoir, on the other hand, is replete with reeds and scantily spread trees, where the birds dwell, nest, and breed. A few stray painted storks and wild ducks were exploring the mangrove patch on the center.

By now the kids were awake and aware and getting excited. I had to teach them how to be as quiet as a mouse for successful bird spotting. We found a hanging branch and perched ourselves, in wait for our hosts to greet us. For a moment it was still with only the rustling of leaves from the morning breeze and a random crow cawing away. Then suddenly, there was swooshing sound and a melodious symphony of a flock of pink flamingos circling over the lake and making the perfect landing on the mangrove patch. And as they settled themselves, the wild ducks dived back into the water, as if to make space for them- a sentiment rarely found in the human world. The pink beauties pecked and fed on the slugs and small fishes from the lake, preening themselves, and trotting around on their stem-like limbs, giving me every frame worth a video. And topping it all, were my cheering kids, which just made the day!

I would not have believed any of the trivia about Thol Lake, had I not seen what I saw. But then again, as they say, spotting your favorite bird is a stroke of luck. You never know when and where you find them! 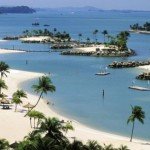 How to plan your trip to Singapore 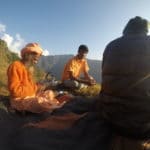 How to select your Travel Insurance plan?...

What to expect when attending a sporting...

A Surreal Shopping Extravaganza in Coorg

How to plan your trip to Singapore

Hotels in Bangalore for Business Affairs

5 Churches To Visit When In Kerala With Family